When competing in sports like canicross and bikejoring, it’s not unusual to catch up to others, or being caught up with. Distractions along the route can also be a challenge. In order to make overtaking other dogs and people a painless experience, you should familiarize yourself with the rules and etiquette of the sport, and practice this.

The standard in competitions is for teams to start with 15-30 second intervals in canicross, and one minute in bikejoring and skijoring. In canicross, there are sometimes mass starts.

Don’t stop to greet others

Throughout the trail she never stops to greet other dogs or people. That way, the dogs learn to bypass distractions rather than seeking them out.

- Training is training. Even if we know them, we don’t stop.

Lena often trains with other dogs when biking, skiing, or sledding.

- We rotate who lies in front and overtake each other several times during the course to make good overtaking a habit for the dogs.

To give your dog good experiences with overtaking, it is important to only train with good dogs that don’t lunge, and who are good role models.

- If your dog is reactive, ski-training is excellent. When skiing you can use your pole as an extension of your arm to correct your dog. That does not mean that you can hit your dog – the pole should only be used to guide your dog in the right direction, and work as a barrier towards the other dog, says Lena. 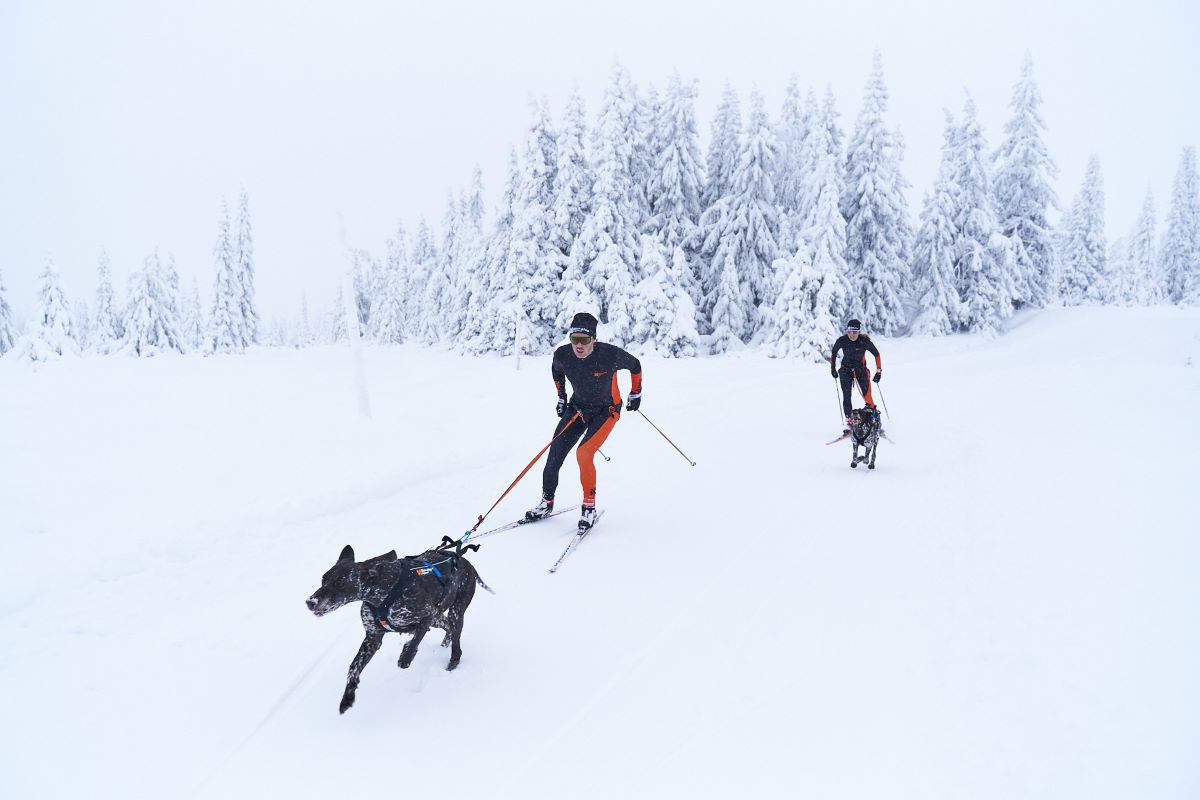 She begins practicing overtaking when her dogs are young, before they acquire bad habits. An adult dog usually takes longer to learn.

When catching up to someone it is important that you make yourself known to prepare them for your arrival. This is easily done by shouting “Trail!” You can also make it known which side you intend to overtake them.

The earlier you let them know, the better. That gives the person in front of you time to move to the side of the trail. If that person has a dog who is nervous or reactive, he/she also gets more time to get control of their dog. This makes overtaking safer for both parties.

Stick to one side

It’s recommended to teach your dog a command to stick to the side of the trail. If your dog is already sticking to the left side, and it isn’t comfortable switching sides, it can be smart to stay there, so you don’t block the whole trail. This is especially important in bikejoring, due to its high pace. In canicross or skijoring, you can also shorten your leash for better control when overtaking.

The team being overtaken can also slow their pace to make the overtaking quicker. It’s better than risking an accident!

Using a command when overtaking others is smart, for example “On by”.

Distractions in the trail

It’s not just your competitors that can be distracting for your dog in a race. Usually in a race you have crowds, photographers close to the trail, and barrier tape and banners you have to pass.

- It has to be taught. You can have people be in the trail when you train, as an extra distraction, says Lena.

Crossing the finish line can also be a challenge. You should practice this, so your dog doesn’t slow down towards the end of the race.

Be considerate to your surroundings

It is also important to master bypassing people, dogs, and other distractions when training.

Being bypassed at a high speed can be frightening, especially if you’re not prepared for a dog approaching you at high speed. As such, you should slow down and make your presence known when approaching someone from behind. This is extra important when catching up to or meeting people with children, dogs, or horses.

To avoid startling people when passing by, you can attach a little bell to your dog.