There are many aspects to consider when you are going to your first canicross competition. Multiple World Champion Tessa Philippaerts from Belgium has competed in canicross since she was 14 years old. Now, she shares her best tips.

- I make sure that everything I need is prepared before competition day. If I am relaxed, my dog will be as well.

Remember to bring your:

Which vaccines your dog needs may vary. Some countries only require rabies and kennel cough vaccines, but it is highly recommended to have all vaccines because you will be meeting many dogs.

In addition, Tessa recommends you bring your own water and water bowls:

- Often, there are water bowls available at the finish, which all the dogs can drink from. When dogs share the same bowl, there is a risk of diseases. Therefore, it is safer to use your own.

When to feed the dog?

Tessa will not feed her dogs less than five hours prior to a competition.

- That is my golden rule. It is very dangerous to feed your dog before you go for a run. Their digestion is very slow. There is a risk of stomach torsion. The day before, I feed them before 17.00/5 PM and give them plenty of water. This to make sure they are well-hydrated and that they run with an empty stomach the day after. You will also avoid your dog pooping on the trail. 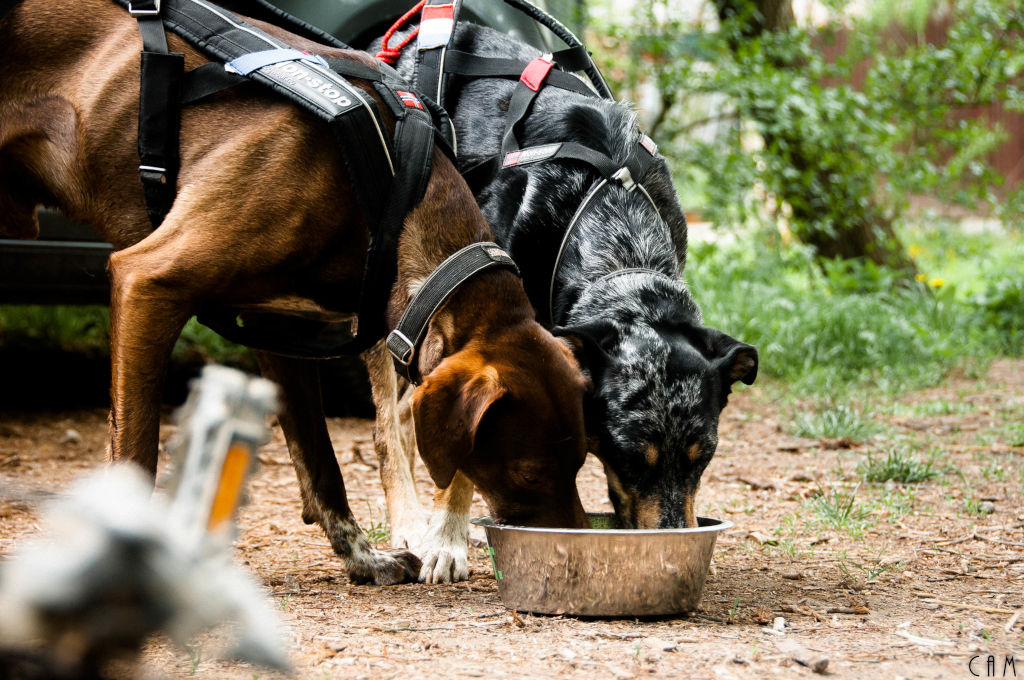 Giving your dog enough water before training or racing is important, though.

- Preferably 1.5 to 3 hours in advance. You can do this by teaching your dog to drink a small amount of water before the first trainings and gradually increase the volume. Some dogs do not like to drink a lot of water. To help them drink, you can put something in the water, such as a very small portion of dry food, energy powder, or a spoon of meat. In our case, a pump or two of the Non-stop dogwear Wild Fish Omega-3 does the trick.

Do not forget to let your dog out for a pee after 15 to 30 minutes.

- After the race, we walk to the car, where they get water with recovery powder. Thirty minutes after the run, I feed them the first portion if they calm down. Later in the evening, they get another portion, a little bit more, which should be enough to recover. I always add plenty of water with their food so I’m sure they get enough in their system.

Non-stop dogwear Energy Pâté is a wholesome dog food with high quality ingredients – perfect to give after a race. 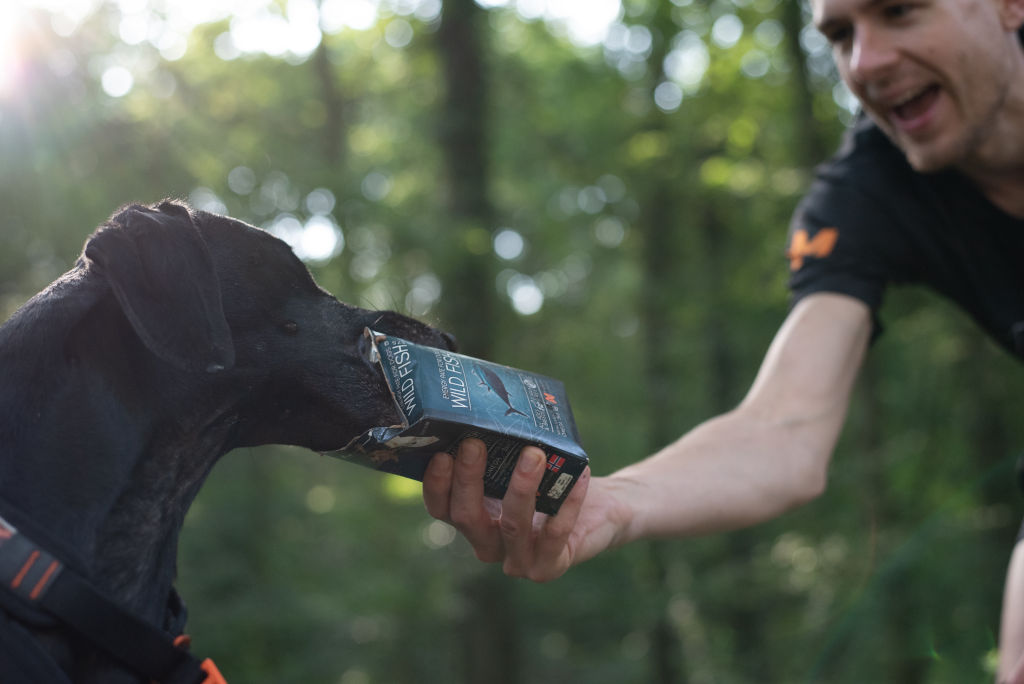 Train the distance you are going to run

If you plan to do an 8-kilometer race with your dog but only train for 4 kilometers, the results would be unfavorable.

- Your dog doesn’t know he is racing 8 kilometers that day. He will run like crazy the first 4 kilometers because that is what he is used to. He trusts you to prepare him well for what you want to do with him.

The day of the race, Tessa will warm up the dogs by jogging with them for about 10 minutes.

- If I do more, the dogs can get very agitated hearing the others bark and can waste their energy

How to handle a mass start

- Mass starts are a bit tricky. Some dogs get overexcited and reactive, while others are scared and stressed. Some dogs are totally fine with it. It is very important to know your own dog in these situations and to take precautions.

Tessa suggests starting some seconds behind the pack.

- Or, just don’t race with that dog 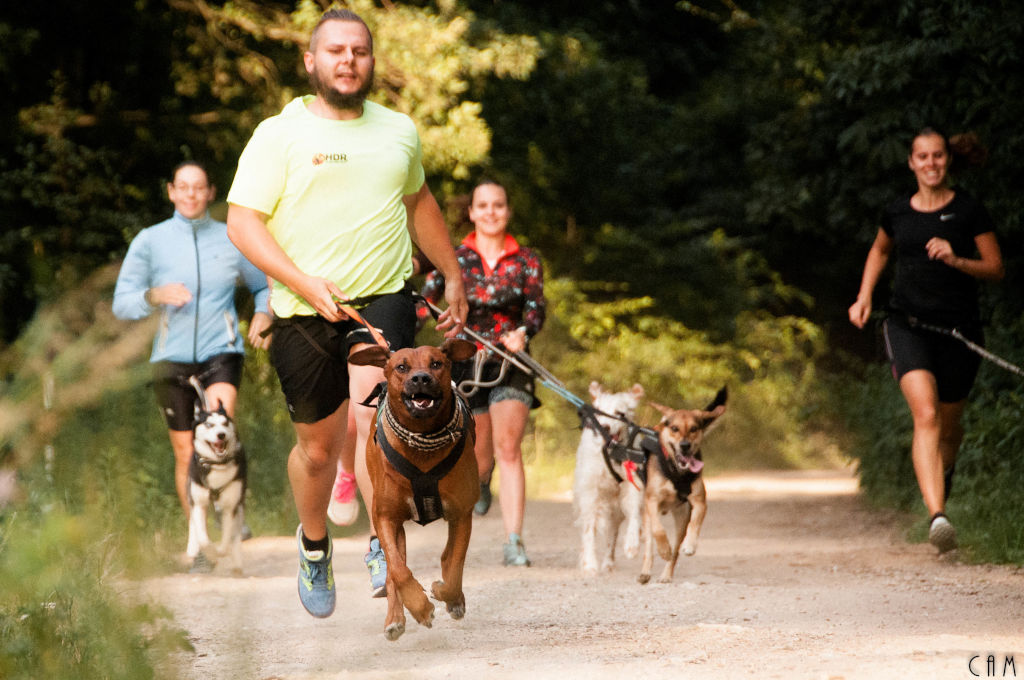 From track and field to canicross

In her teenage years, Tessa was a big track and field fanatic. In long jump and hurdles, she was top five in Belgium.

- Very often, I had to train for long endurance runs, which I hated. I was never really good at running long distance and preferred everything from a sprint to a maximum of 1000 meters.

After Tessa’s father saw that she was struggling with her motivation, he gave in to the pressure of buying a dog to accompany his daughter on her runs. Angel, the Whippet, entered Tessa’s life.

- She was the sweetest female Whippet in the world, and she was just as crazy about running as me! She went with me on all my training runs, running free or jogging on a leash. Not long after she turned one year, my father saw something called canicross on the Internet. I remember him saying, “That is something for you!” We drove to one of the races, bought all the equipment there, and I competed with her for the first time. I had so much fun! We finished last place, but I did not care!

Ever since, Tessa and Angel basically went to every race, improving each time. They even became Belgian vice champions!

At the age of four, Angel unfortunately damaged her shoulder while playing fetch.

- We couldn’t run together anymore. I was devastated

Tessa borrowed some dogs from friends to continue racing, but it was not the same. She missed having her own dog. Some months later, she met Yukon, a one year old sled dog in France. It was love at first sight.

- I fell in love with him the first moment we met. We started training, and he turned out to be the biggest talent I have ever seen.

Three months later, Tessa and her father discovered that the World Championship of 2011 was held in Borken, only three hours away. They decided to give it a shot.

- Never in my wildest dreams did I expect to come back home with the gold medal in the junior class and a faster time than the best senior lady day two! From that day on, I understood we were a great team. Many more gold, silver, and bronze medals in Belgian championships, European championships, and world championships followed, though not only in canicross. He also has been quite a star in bikejoring.

- Yukon is nine years old now. He is still in great shape and still loves running, but I can see that he is getting older. I respect the days that he is tired and needs rest, and I love all the days that we can still rock the trails together. I am so grateful that this stubborn Alaskan crossed my path. He has changed my life and taught me all that I know about racing.