- Canicross gives Inka the opportunity to be a dog, says Helene Svinos.

Blind puppy Inka was found in a river in Romania at about 3-weeks of age with her head on a piece of wood, trying to stay afloat. The charity organization Eli For Animals took care of her, and some months later, Inka arrived in the UK to live with Helene and her five dogs.

Three of her dogs are disabled. Helene also has a two-legged dog from Afghanistan and a paraplegic dog, also from Romania.

- My goal is to show how they are just normal dogs, albeit with broken or missing bits.

Has her own guide dog

Inka used to get quite frustrated because she couldn't go off the lead like her new siblings unless in a secure field, and that was also dangerous for her.

- In a bid to ease her frustrations, I started canicrossing her gently.

Originally, Inka had one of Helene's three canicross dogs attached to her to have her own guide dog.

- It was difficult trying to work out the right configuration with harnesses and which dog suited. I found it to be Seren.  Neither of them liked a neckline but she needed the extra guidance that came with it, so I attached the line between the harnesses to keep them close together and played around with lead length and things like that and slowly built her up.

Inka is quite a fearful dog.

- Before I got her, she didn't get the socialization due to her vulnerability. Canicross has helped tremendously.

Inka took part in her first competition supported by her "sister" Seren at a CaniX event at Pembury.

Inka had been used to the event's smells and sounds, as they are a regular feature for Helene and her dogs. It turned out running was rather different.

- She was a bit scared of all the noise at the start and finish and the marshalls. The next day I made sure she had a good smell of all the marshals prior to racing, and she was far more confident. 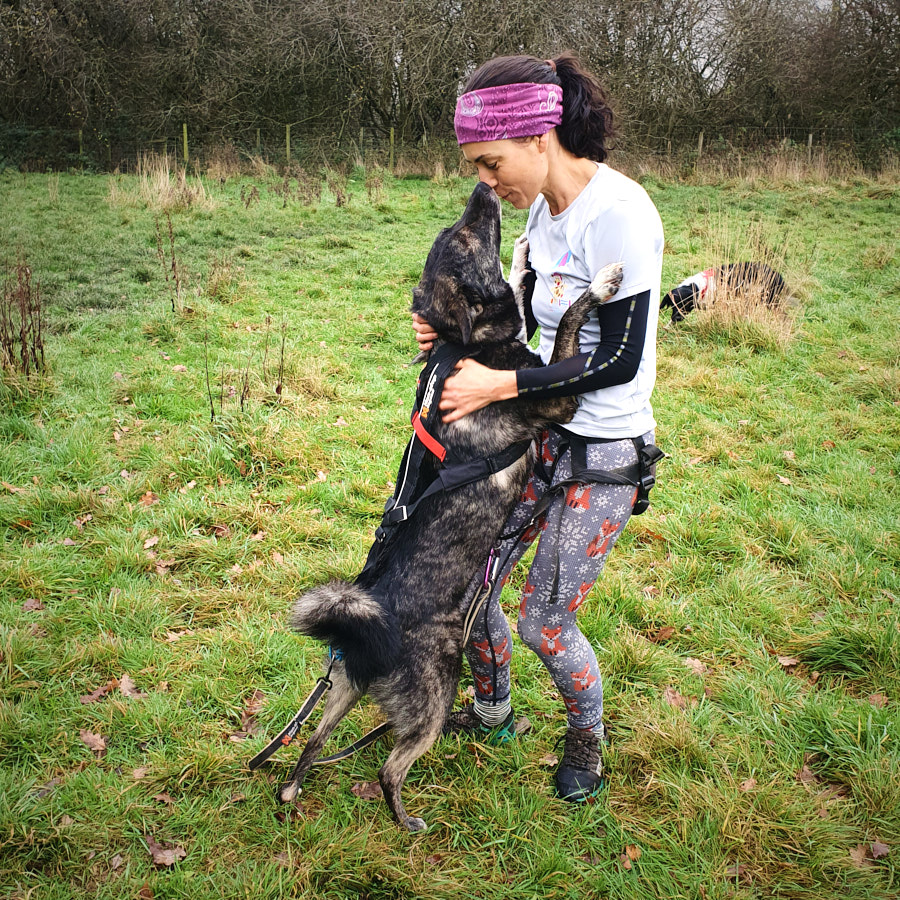 Since then, she's gone on and competed in many local events. The organizers are happy to help the team succeed.

- It's usually the same marshalls, so Inka knows them. When we run past them, they just give me a thumbs up. When we come up to the finish, Dawn and Linda on the finish line ask people to be quiet when we approach, which is really kind. I didn't realize they did that until I heard them say there's a blind dog coming up and asked everyone be a bit silent. We get a lot of silent waves across the finish line, which is lovely. It's built Inka's confidence up hugely.

- It happened by chance as we were staying at my parents and running on the beach. I let Seren go in the water with the other dogs and just let Inka run on her own.  She did so well that I continued along quite a well-defined track to see how she did. It was awesome! Inka was chasing the springers, and she knew all the cues so well; left, right, careful, steps, upstairs, downstairs… Since then, she pretty much runs solo all the time.

Helene says Inka is having a great time when running.

- Canicross gives her the opportunity to be a dog. This activity allows Inka to have fun with the pack, run through woods, and enjoy the environments that she enjoys sniffing. Inka is fantastic. She is super speedy when she wants to be, and canicross has given her a huge confidence boost and us a lovely bond as well. I'm now seeing things from her point of view. That has improved my ability to train her in other things as well, with more awareness of her environment.  Most of all, we have so much fun. Seeing her so happy and enjoying life is the best thing ever.

Gifts for camping with dogs

A small dog can make a big difference

I got a puppy! What should I do?

Do you want more?

Sign up to get news and informations about new products, upcoming events, and other news from Non-stop dogwear.