A dog can be more tired after using its head for 10 minutes than after an hour-long walk. One of the most effective ways is to let the dog use its sense of smell. You can very easily make exciting games, that are keeping your dog both busy and satisfied!

It can be smart to use some of the dog`s meal as treats to make sure it doesn`t eat too much. By serving food this way you will satisfy your dog`s natural need for sniffing.

What you need: Treats.

Place the treats all around the house, and let the dog find them by sniffing. It can be clever to start easy. Let the dog see where you are placing the treats. Place directly on the floor without hiding them too much. After a while you can increase the difficulty by:

The same can be done outdoors.

What you need: A rubber mat and fleece blankets.

Cut the fleece blankets into strips that are approximately five centimeter wide and 35 centimeter long. Attach them to the rubber mat with a double knot. The size of the mat and how closely the knots are sitting is up to you. When the rubber mat is done, you can place treats all over it. 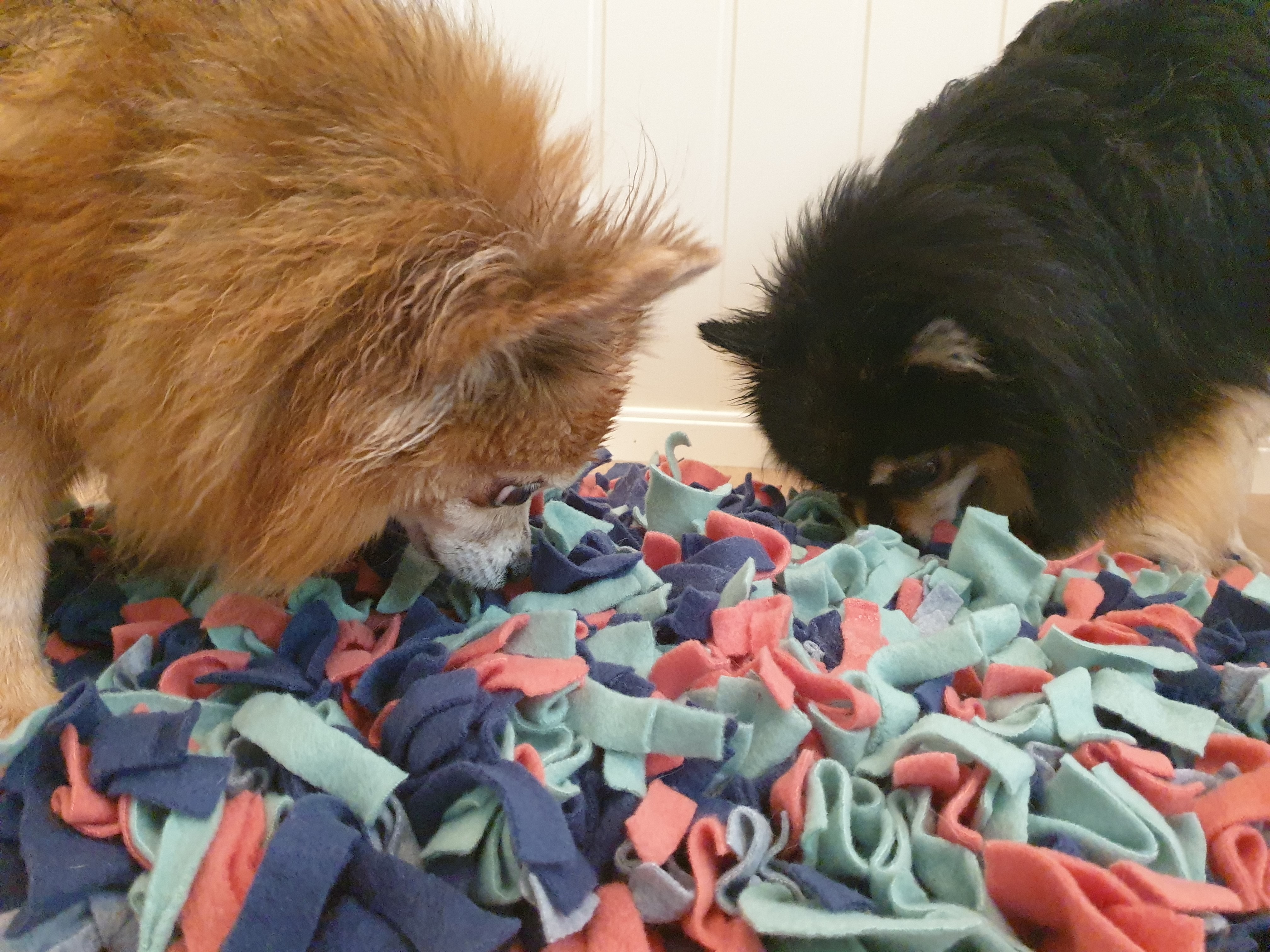 It is also possible to make an easier version, a braid. Cut a kitchen towel or other material into three strips. Make a braid and tie together the ends or attach them with a rubber band. Place treats in the fabric.

What you need: Treats and water/wet food. A freezer and ice cube tray, or a toy that can be filled with goodies.

The dog is using more time to eat since the food is frozen, preferably in a toy that was made for this purpose. Place the wet food or a mix of water and treats in the object you wish to use. Put it in the freezer until the mixture is frozen.

Treats in a bottle

What you need: Treats, an empty bottle and a drill or knife.

An old plastic bottle can be an exciting pastime for your dog!

One possibility is to fill up the bottle with treats, put on the bottle cap and drill big holes at different places on it. The purpose is to make the dog roll and move the bottle, so the treats fall out. The bigger hole you make, the easier it will be for the dogs to get the treats out of the bottle. Therefore, it can be clever to start with a bigger hole and simple difficulty, so your dog understands what the toy is about. If it`s too hard the dog might give up! Then you must make it simpler.

Watch out that there are no sharp edges which can injure the dog.

If your dog manages this, you can try a bit harder version. Put treats into a bottle without holes. Don`t put on the cap – the purpose is to make the dog move the bottle around, so the treats fall out through the opening. Make it easy for your dog in the beginning by filling up the bottle almost fully with treats. After a while, when the dog understands the task you can have less treats in it.

A third version is to drill holes through three bottles, put a stick through them and hang up the stick on a stand. Put treats in the bottles. The bottles are not standing with their bottom towards the ground. The purpose of this game is to make the dog hit the bottles with its paw, so they turn around and the treats fall out.

What you need: Muffin pan, tennis balls and treats.

If you have a small dog, you can make the same game with an egg carton.

Here you can see how or friends at McCann Dog Training do it:

What you need: Cardboard boxes, treats, tape and eventually newspaper.

Only your imagination is the limit when it comes to variability! You can for example crumple newspapers and place them in a shallow cardboard box. Pay attention that the staples are taken out, so your dog does not hurt itself!

Scatter some treats into the box, so the dog has to look for them.

If you want a bit more difficult version put treats and newspaper in smaller food boxes, tape these together and put the small boxes into a bigger one. Smaller boxes with treats can also be placed in other objects, like for example a plastic bag holder. Paper towel tubes filled with treats can also be put through this one for additional challenge.

What you need: Toilet paper or paper towel tubes.

If you have a smaller dog, a toilet paper or paper towel tube filled with treats can be nice interactive games!

Put treats into the tubes and fold the ends together. If you wish to increase the difficulty this can also be filled with newspaper or it can be also frozen.